Hey... wait. Are things actually up for Ratboy, Marvin and T.J.J.? Did they actually finally get Wish, like, the real Wish? Is Ratboy going to be finally reunited with his Paladin? Is Marsha going to finally propose to the mailman?


Wait.. Scratch that last part. But really, things seem to be going well. I wonder if how that's going to be ruined.
After dealing with some personal items and really making some concerted efforts to improve my life, I'm also looking to really get back into doing these comics. To celebrate, I'm doing what I do best, completely changing the look of the site on a whim. I wanted it to be more in tune with atom8bit.com and plan on doing the Damn It, Monkey site this way.


I also really pushed to get the image size up on the new comics, standardizing (going forward) on 1000px widths. I am a bit weary on it as it might make it harder to read on mobile, but let's see how it goes.
Oh you know, around. Things get busy, I've started a real career and spent a lot of time with that. Plus you know, working with gaming groups, etc, but that sort of stuff is behind me. Well, not the career. I actually enjoy that.


Anyway, I figure, I wasn't finished telling this story, about these little twerps nobody likes and their magical adventures in the ghetto. And sweet Ghetto Jesus, it's been a LONG time since I've done this. I got a new comic up today, redesigned the entire site, built it out and got rid of some of the unneeded crap on it.

Look, I'll do my best to keep this updated, but I can't promise anything. I really can't. I like work, but it's extremely demanding, so I'll do what I can. But I figured I'd do this: If you Donate Anything at all then I'm going to make sure I get a new page up within 3 days, at least for the time being. If this matters to you and you want to take advantage of it, do it now.
Oh you know, I broke my arm not long ago. Was kind of hard to draw with only one arm. But hey, you finally get a new comic. 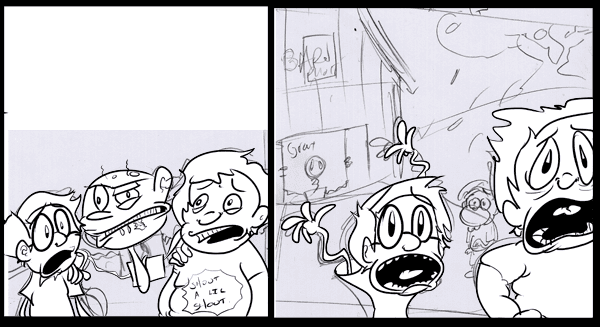 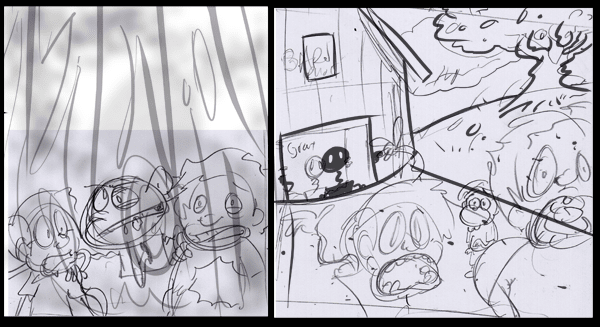 So, after I have a reasonably decent layout, I then actually pencil in each panel. Since this comic is done mostly digitally, I often draw each character individually and then place them on the page later in photoshop, or other times I'll simply draw the whole panel, such as the example below.

I then scan the penciled images into the computer. I lay the page panels out in Photoshop, and then place the scanned drawings in onto the panels, and arrange the page exactly how I want it laid out. It's pretty quick if I have the panels all drawn out already but can take a while if I drew everything separately. Then, I take out my trusty Wacom tablet and begin to draw the final product.

Next time: What I do after I pencil like an idiot

This is honestly the only real question I get asked consistently. Yes, the term FAQ might not be entirely accurate. It's not a terribly complicated process, so here's a fun blog post about how I do this. There are actually two different methods I've used - whether I draw the comics by hand and just touch them up digitally, or whether I draw them almost entirely digitally. Since the second one will probably be not only easier to show you but a more interesting read, I'll focus on that one, since it's what I primarily use now, since I'm lazy. (which will be a running theme throughout this series of blog posts, trust me.)

First off, I write the comic. As of this blog post, I've completely written about half the Ratboy story. I constantly revise it and add little jokes as I see fit, change gags that seemed rushed or convoluted, and do my very best to not resolve things with Deus Ex Machinas - even though it's an occasionally funny and super convenient literary device. I have the rest of the story loosely lined out and write in whenever I feel like - which is why I write so far ahead because I get distracted easily. 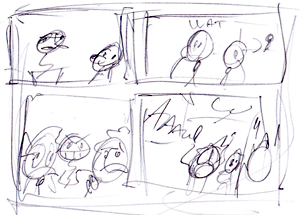 When it comes time to actually draw the comic, I first draw a very rough outline for composition. This usually takes about sixteen seconds. I time myself. Mainly it takes such a short amount of time because I get lazy. I don't always have as much time as I'd like to draw these comics, and I wish I did, because I could get better compositions rather than lame ones. It really depends on if I'm in a hurry or not.

I tend to leave the backgrounds blank at this spot unless it's necessary, easier, or otherwise prudent, such as in the final panel pictured here. I do this mostly to give me more flexibility when reevaluating things like the composition for each page, and to make sure the backgrounds actually work with the much-more-important foreground.

Coming up in part two: Pencilling Like An Idiot

You know what you might find mildly interesting? A character design I've been working on. Pickles by ~apathyzeal on DeviantArt

This is Pickles. He is a being of great power. You'll get that joke if you look again. Pickles is on the right, I haven't named his pet yet.

Also here's something that I won't deny: The Super Mario type influence. It wasn't intentional until I saw it, then I ran with it.

I made some changes to about 40 old pages on here, actually. Mostly just very minor cosmetic things, things I messed up - like forgetting to color in Ratboy's nose and things like that.

But I did correct some continuity errors and fix a few fonts to make the storyline a bit more cohesive. Yes, there is a plot outside of character development.

It looks like, at least in the immediate future, I'll have plenty more time to work on comics! I'm not going to promise a regular update schedule, just yet - but here's a new comic for today, and there should be at least one more this week!